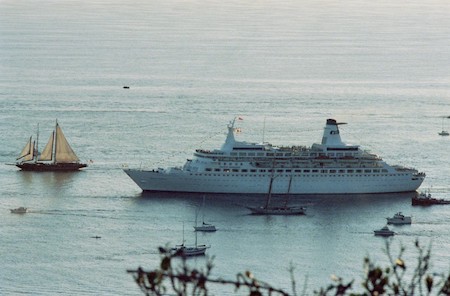 In 1985 crowd of 50,000 welcomed the cruise ship Pacific Princess, star of television’s “The Love Boat,” which arrived to make San Diego it’s home port. The arrival marked a new era for the city in the multi-billion dollar cruise-ship business. 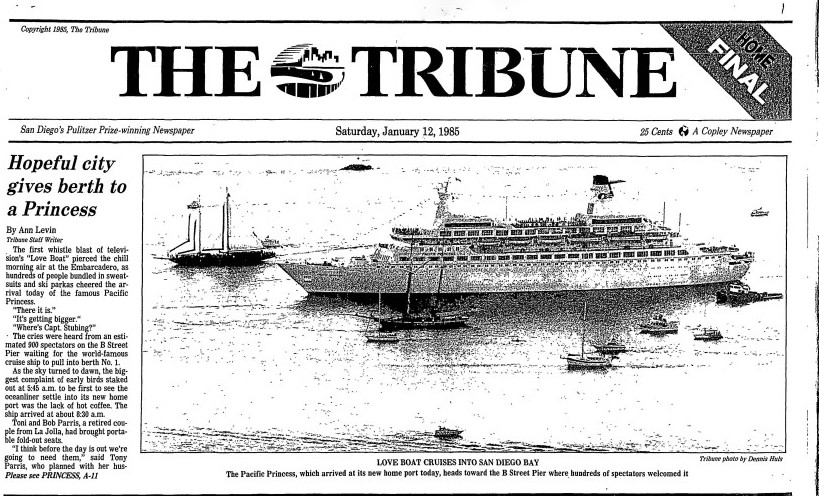 The first whistle blast of television’s “Love Boat” pierced the chill morning air at the Embarcadero, as hundreds of people bundled in sweatsuits and ski parkas cheered the arrival today of the famous Pacific Princess. 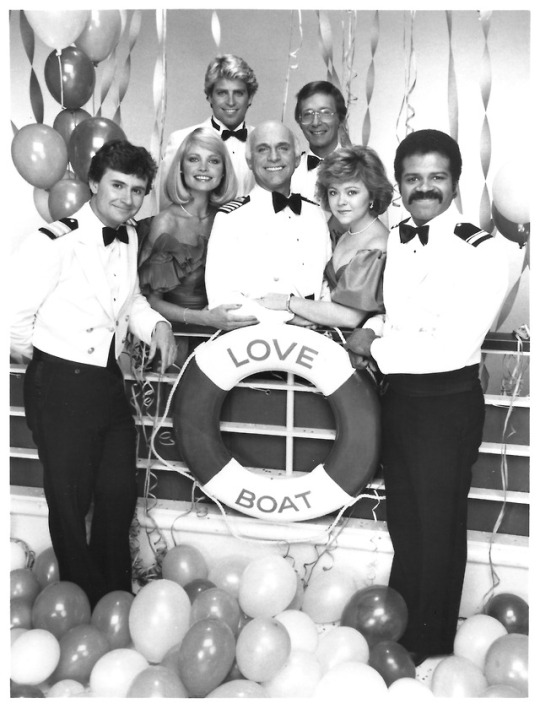 The cries were heard from an estimated 900 spectators on the B Street Pier waiting for the world-famous cruise ship to pull into berth No. 1.

As the sky turned to dawn, the biggest complaint of early birds staked out at 5:45 a.m. to be first to see the oceanliner settle into its new homeport was the lack of hot coffee.

The Pacific Princess heads toward the B Street Pier on Jan. 12, 1985.(Dennis Huls / The San Diego Union-Tribune) 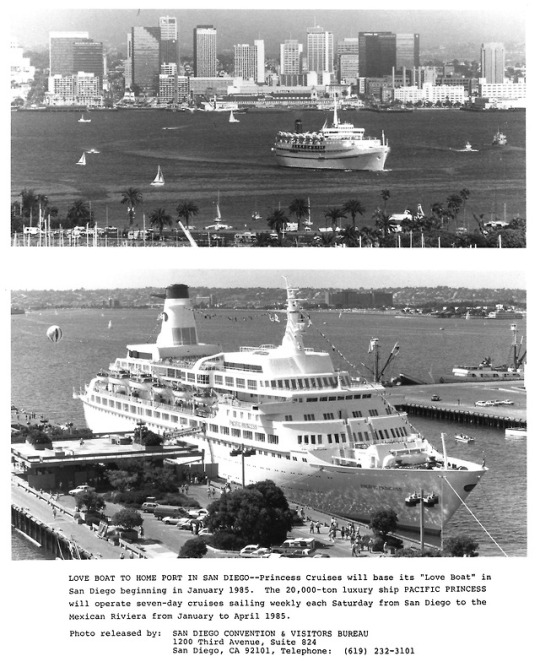 “I think before the day is out we’re going to need them,” said Tony Parris, who planned with her husband to tour the Navy ships, watch the boat races and sample the different foods at the all-day Homeport San Diego Festival along the waterfront.

Officials estimated the festival would attract between 20,000 and 50,000 people throughout the day.

Leslie Herbert, 18, a student at Grossmont Community College, arrived at the dock with her classmate, Christina Ippolito, also 18, to see the boat she had cruised on last spring on the Mexican Riviera.

“I’ve cruised on it before, and I wanted to see it again,” Herbert said. “It’s pretty nice to have it down here instead of LA.” 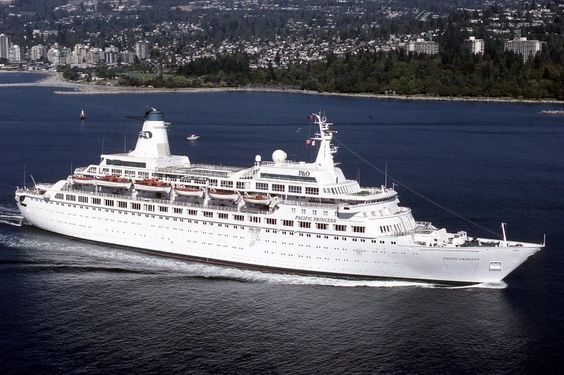 Ten children, ages 10 months to 12 years, shepherded by Lynn Quarders of Santee, had staked out a prime spot next to a chain-link fence that separated the public area from the dock and the Pacific Princess’ berth.

Quarders had gotten up at 4:30 a.m. to get her five children and five neighbors’ children ready for the event.

Said 10-year-old Michelle Willart, a student at Prospect Elementary School in Santee: “We want to see the Love Boat because it’s big and it goes in the water and it has famous people on it and it’s on TV.”

The city marked its love affair with the “Love Boat” by a dawn flotilla of recreational, fishing, Navy and research boats meeting the Pacific Princess off Point Loma and escorting it to its new berth at the B Street Pier.

By 9 a.m., long lines formed for food and beverage tickets, the only currency vendors would accept for steaming, creamy bowls of chowder and other seafood dishes. Some of those who had waited on the pier for nearly three hours for the arrival of the “Love Boat” were ready for a beer.

Camera-toting tourists continued through the morning to approach the cruise ship’s sparkling-white hull while rowers raced their crew boats in the waters around the ship.

Many of the passengers who disembarked the Pacific Princess, which had been in Mexico, boarded buses for the airport after clearing Customs. Some will stay another three days and others returned to homes in the San Diego area.

The Homeport San Diego Festival included music, half-price admission to the Maritime Museum’s ships, free admission to Navy ships, oceanographic exhibits to celebrate “The Year of the Ocean,” art and photography displays, canoe and sailboat races, a seafood feast and a floating theatrical pageant produced by the Old Globe Theater.

The activities will conclude tonight with fireworks, cannon salutes and light signals from all ships in the harbor.

The Pacific Princess is scheduled to depart for Mexico at 7 p.m. Access to the Princess was not provided because crew members had to load passengers and prepare for the weeklong cruise.

The 20,000-ton liner, with accommodations for more than 650 passengers, is scheduled to leave San Diego each Saturday through April 13 on seven-day cruises to the Mexican coastal cities of Cabo San Lucas, Mazatlan and Puerto Vallarta.

After a series of Mediterranean cruises, the Pacific Princess will return to San Diego for the 1986 winter season.

Before coming here, the ship was based in Long Beach, where segments of the “The Love Boat” TV show have been filmed since the series began nearly 10 years ago. No filming is scheduled at the home port of San Diego.

The deal to establish San Diego as its home base originated in part with Princess Cruises’ decision to introduce its new “super Love Boat” in Los Angeles. It had to find another home for the Pacific Princess.

Other cruise ships that will be based here include Crown Cruises’ Viking Princess and Explorer Cruise Lines’ Pacific Northwest Explorer and North Star.

Industry experts predict the cruise ships will bring millions of dollars to the city in tourist revenues and say more people than ever are taking cruises.

Don Harrison, executive director of the 135-member Cruise Ship Consortium, is optimistic about the future popularity of “cruising.” He pointed out that going on cruises isn’t just for the wealthy anymore.

“Cruising,” he said, “is basically a nice hotel that actually goes somewhere.”