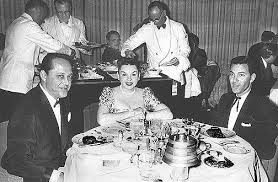 JUDY GARLAND aboard the SS UNITED STATES sailing from New York to Europe.

Judy Garland is sailing today on the SS United States. 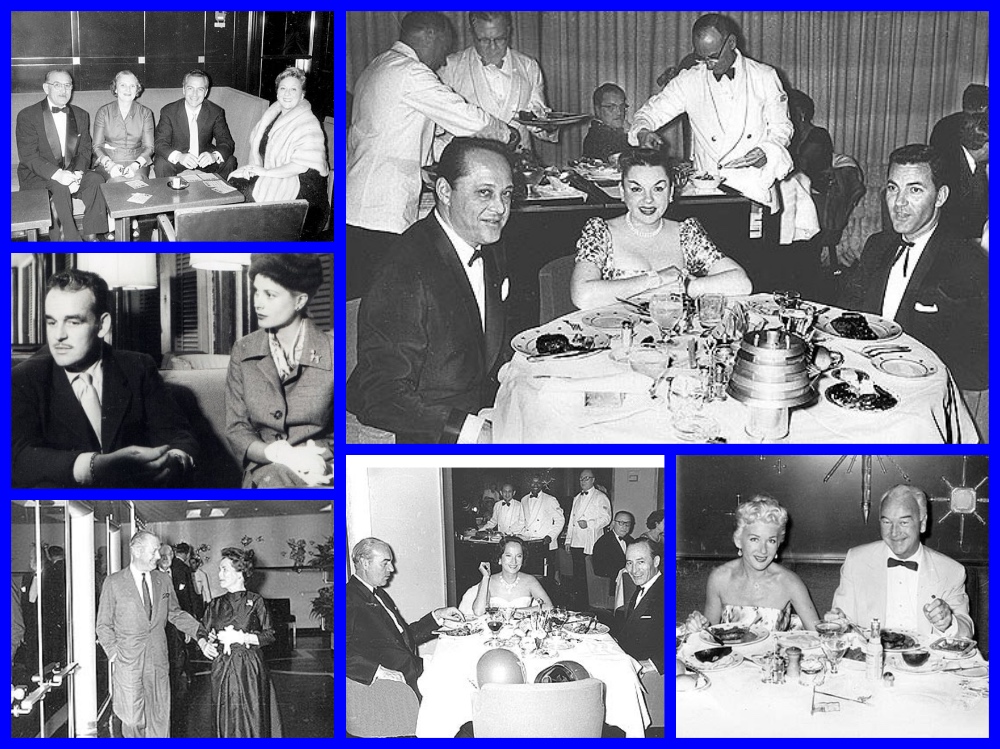 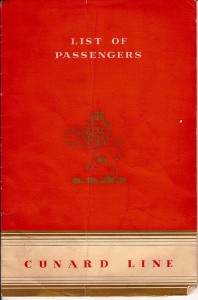 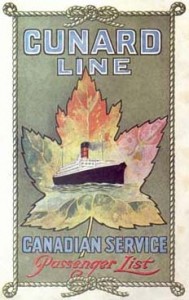 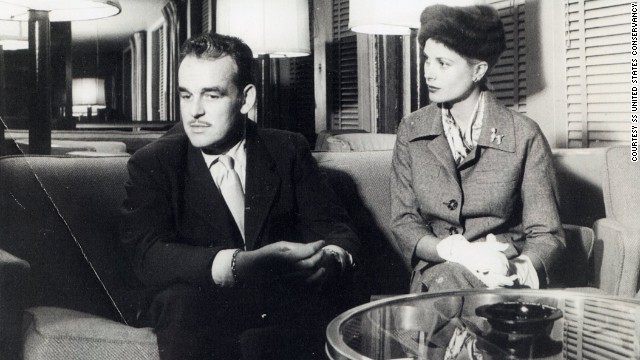 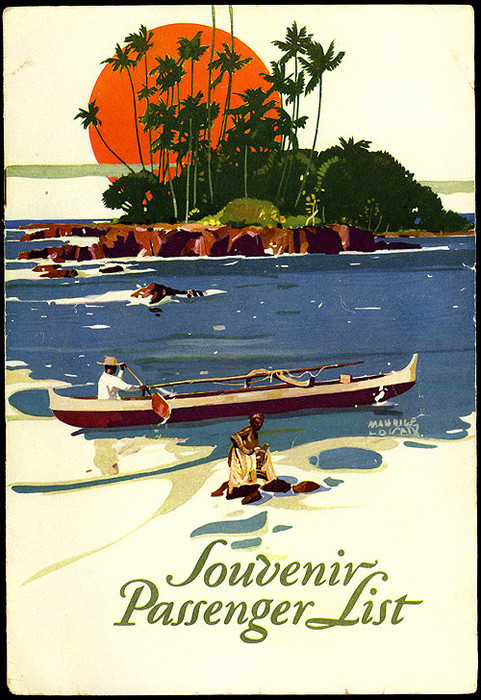 Our thanks to Theodore Scull for the following… from Cruise Magazine…

ONCE, WAY BACK WHEN, UPON ENTERING ONE’S CABIN, the first order of business was a quick look at the Passenger List laid out on the table alongside the dining reservation card, telegrams, and the first batch of invitations. On a two- or three-class ship, the names usually included only those in one’s own class, minus some celebrities or a recluse that explicitly asked not to be listed. On a one-class cruise, of course, there was but one list.

Why the rush to know who was aboard?

Well, for those who traveled by sea on a regular basis, there were bound to be others one knew or knew of, and it was good to know the good or bad news in advance before you bumped into them on the promenade deck at sailing time.

My mother would immediately take out a pencil and bracket familiar names. Annotations would appear when she made new acquaintances such as they are “friends of so and so,” or he is a member of the “Metropolitan Opera,” or she is a “recent widow” who would undoubtedly like to be included in our group.

The initial passenger list would often be supplemented within 24 hours by those who booked late or got missed for some reason.

Aboard P&O’s Cathay, from London via Marseilles for Australia in May 1926, titles were used, such as Gainsborough, Mary Dowager Countess of; Somers, H.E. The Lord, D.S.O., M.C., and two valets; and on the next line Somers, Lady, child, and nurse. It is interesting to see for whom the lord and lady were responsible.

On the United States Lines’ ships, government and military personnel were aboard in great numbers, and they had ranks listed such as Adm., Capt., Cmdr., Maj-Gen., and 1st. Lt.–often with USN, USNR (Rtd.), or USAF tacked at the end. Then there were Rt. Rev. Msgr., Dr., Repres., and Hon. or The Hon. On the U.S. Lines, the name would be written Adm. Thomas G. W. Settle USN, while P&O would write Massy-Lloyd, Brig-Gen. S.E. The Italian Line used Italian appellations–Sig., Sigra, Bimba, and bimbo–there were 10 little bimbos on my Cristoforo Colombo westbound crossing from Trieste to New York in August 1969!

On a trans-Atlantic crossing from New York to Cobh, Havre, Southampton, and Bremerhaven on the SS America in October 1957, passengers were listed without regard to their port of debarkation, while aboard an eastbound crossing of the SS Rotterdam in September 1966, those debarking in Southampton had an asterisk next to their name, while those leaving in Le Havre had a squiggle S, and those bound for Rotterdam, the ship’s home port, had nothing. Hamburg Atlantic’s SS Hanseatic divided the list into the ports of debarkation; on an eastbound sailing I made in September 1963, in tourist class there were 67 passengers bound for Cherbourg, 59 for Southampton, and 780 for Cuxhaven. Yes, the ship was overwhelmingly German and German-American, and during bingo sessions, I learned to count in German.

If a passenger version of the ship’s log was not presented near the end of the voyage, some booklets included one to fill in each day with the noontime position by latitude and longitude, air temperature, sea temperature, wind speed, state of the sea, number of miles traveled since noon the day before, and the average speed over that period. Then, usually, there were a few pages left blank for making notes, often for commenting on the weather and whom one met and what occurred after that. 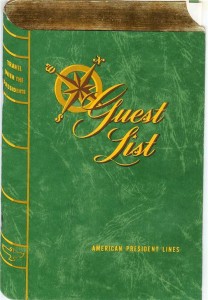 Some traditional lines hung on longer than others, but by the mid-1970s, the passenger list was becoming a dinosaur–along with the trans-Atlantic liner. Some upscale cruise lines continued the tradition for a while, and a few–for example Crystal, Seabourn, and Cunard (on the QE2 World Cruise)–still keep it up today. However, about the only other times, one sees a list now are on expedition ships near the end of a voyage where passengers are asked, on a voluntary basis, to rill out a sheet with their names, addresses, phone numbers, and e-mail addresses. In this intimate situation where everyone is already acquainted, most passengers usually oblige.

I have kept every passenger list from my early voyages, and once in a while, it is fun to have a glance back at whom I remember or have long forgotten. One passenger, I sailed with in July 1958 eastbound on the French Line and who trounced me in the table tennis finals was–horror horrors–listed on that summer’s westbound trip. But I never saw him, because he was seasick during the first round of play and for most of the voyage–a moot point as it turned out because the finals were canceled by Hurricane Daisy. Another passenger from that westbound voyage remains a good friend today, 45 years later. Mother had bracketed his name early on. 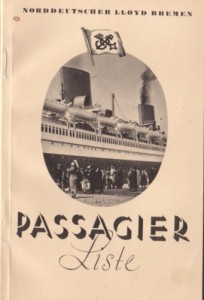 The “PASSENGER LIST” for the RMS Queen Mary is from a five-day cruise from New York to Nassau, which departed on November 17, 1965. General Information For Passengers included a paragraph about hiring deck chairs, rugs, and cushions for $3; using the ship’s Radio Telephony & Telegraphy services; that passengers should request their bedroom steward to open and close portholes; and advice against using salt water for bathing while the ship is in port. 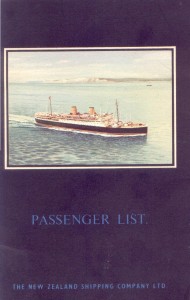 The cover of this Canadian Pacific passenger list depicts travelers aboard the 42,500-gross-register-ton Empress of Britain enjoying a passage along the St. Lawrence River. CP’s largest liner had departed from Southampton on September 16, 1931, via Cherbourg bound for Quebec City (the vessel was too tall to get under the bridges to reach Montreal). As Canadian Pacific was the world’s largest transportation company (the fleet included 24 ships), within this passenger list is information about onward CP Trans-Continental railway service via The Dominion and The Imperial to stations west to Vancouver, CP hotels CP Express Company Travellers Cheques, CP cruises, and CP Trans-Pacific services. 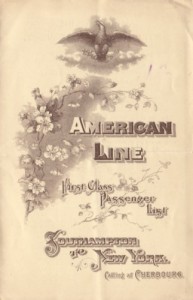 “PASSENGER LIST” for Swedish American Line notes members on the Lions’ Cruise to the Havana Convention aboard the motor liner Kungsholm, departing New York on July 20, 1940. The passage to Cuba took three nights, with three days next spent anchored off Havana, then three nights more back to New York. The schedule shows the last tender as being at 3 a.m., with a warning that passengers will be responsible for any expense occurred by failing to re-embark before the set time for departure.