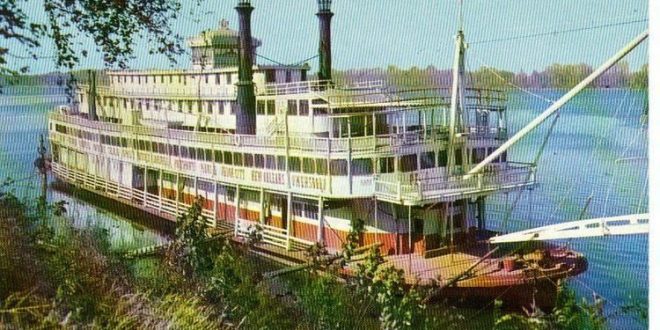 The GORDON C. GREENE sailed south on the Ohio and Mississippi Rivers – from Cincinnati to New Orleans and back.

The Gordon C. Greene heads down the Mississippi for New Orleans. 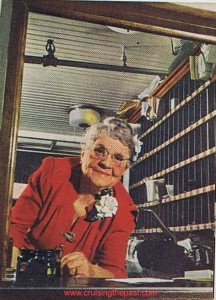 Capt. Mary Greene – co-owner of the Greene Line, and for 50 years the only woman pilot on the river.  She also was hostess aboard the steamboat. 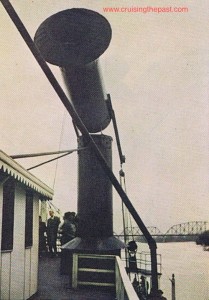 When the river was high – the Gordon C. Greene would fold its smokestacks in the middle duck under bridges 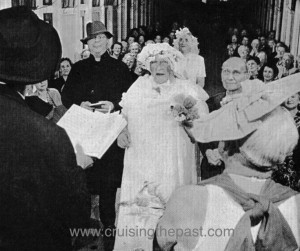 A mock “drag” wedding was one of the activities aboard the Gordon C. Greene cruises.  The “chapel” is the dining salon of the steamboat. 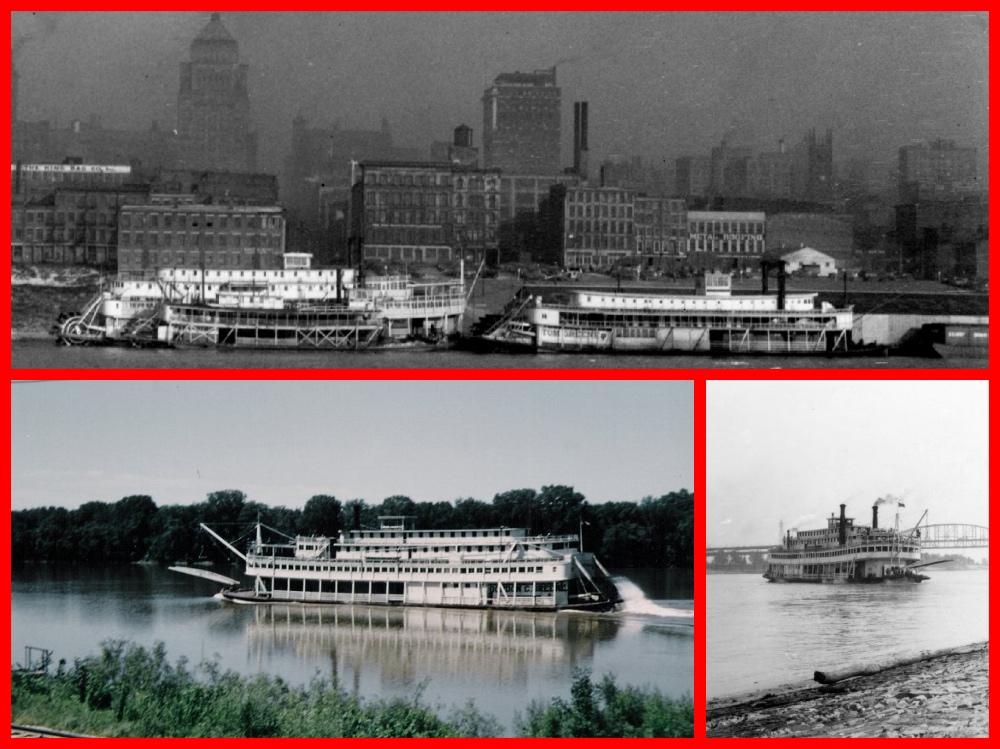 She made history before she even touched the water. When Ed J. Howard died he left the operation of the shipyard in the hands of his two sons, Clyde and James E. Howard. They agreed that it would be best if Clyde ran the office while Captain Jim bossed the yard. 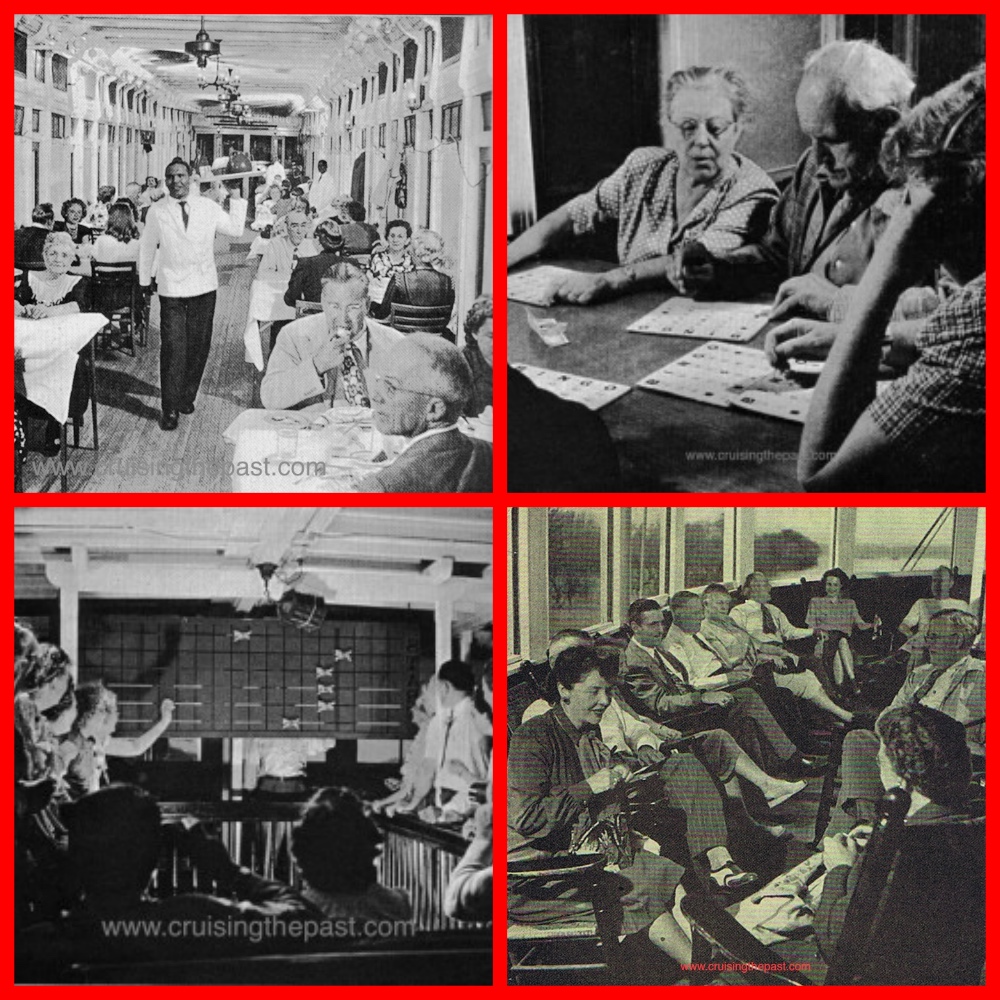 The day for the launch came and Clyde Howard went into the yard to supervise the work, much to his brother’s dismay. He made a good job of it, too. Later they met in the office and agreed that one of them should buy out the other. James E. Howard did the buying and ran the firm until the beginning of World War II. 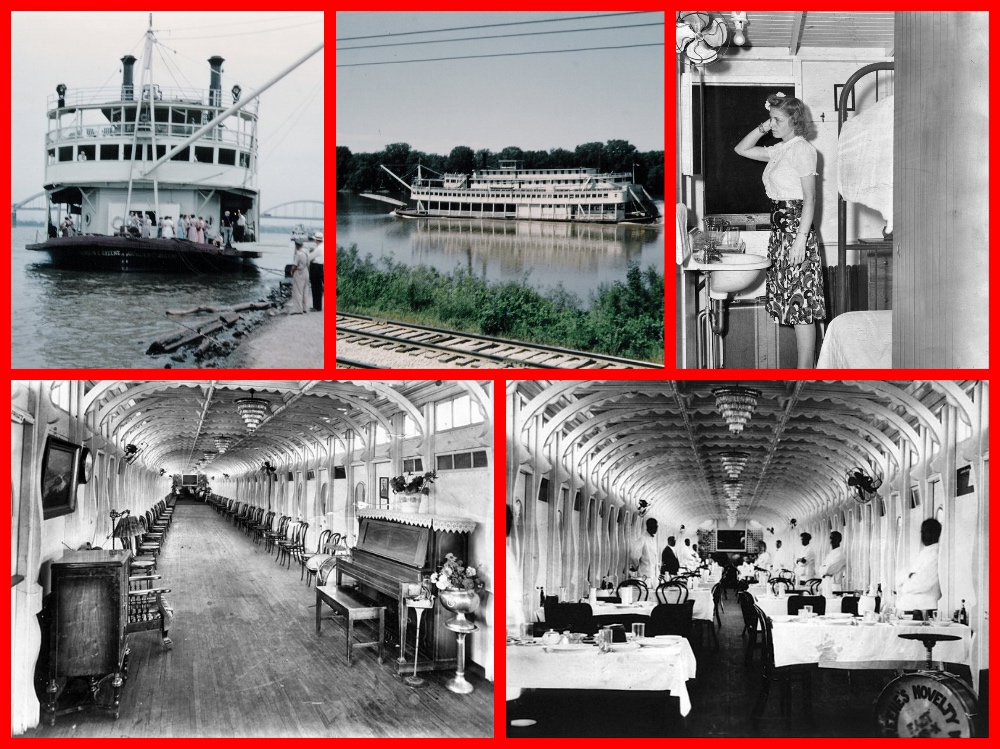 Clockwise: The riverboat landing; Riverboat heading down the river; Young lady in a cabin; The salon for relaxing and entertainment; The salon ready for dinner.

She served the Eagle Packet Company in their various trades, including Mardi Gras trips from 1925 to 1930, getting a taste of the work in which she was to gain undying fame. By 1935 the pinch of the Depression was so severe that the Eagle Packet Company was forced to do some drastic retrenchment, as they could no longer operate two boats (they also owned the much loved Golden Eagle), but over on the Ohio business was improving. Captain Tom Greene had an idea that he could make money with a tourist boat, so he started looking around for a suitable vessel. The Eagle Packet Company proffered the Golden Eagle, but he wanted no part of a wood-hulled boat. As those were desperate times they sold their fine steel-hulled steamer to the Greene Line for $50.000. 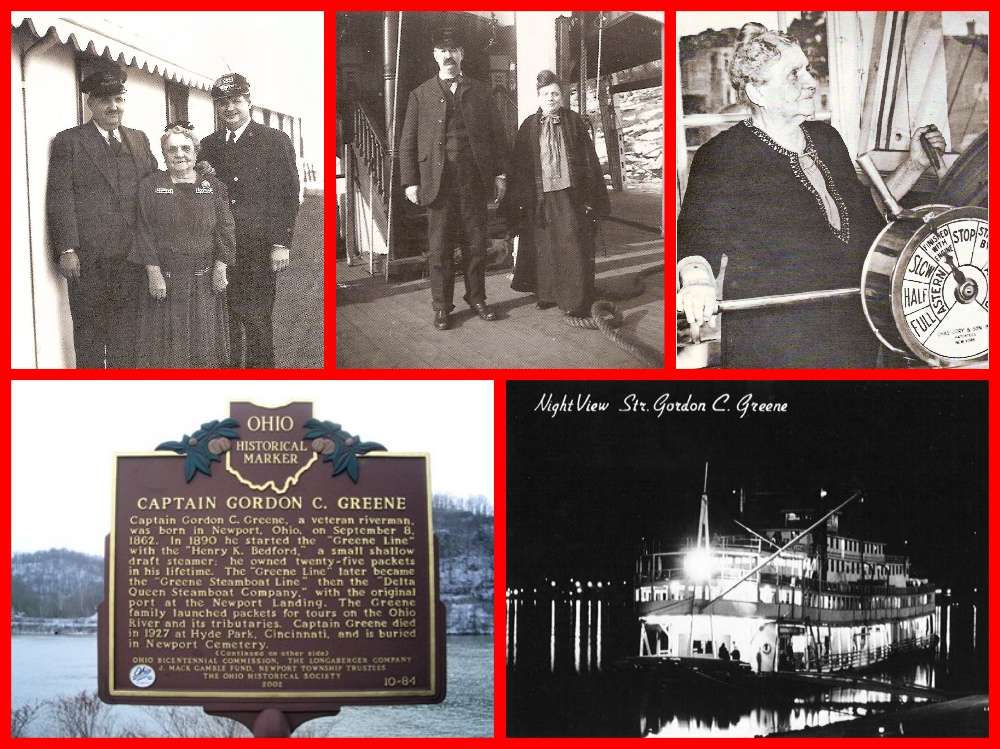 Greene Line family photos; the steamboat and memorial to the company.

This transaction demonstrated the social unity and integrity of river folk when they faced a bad situation. Captain William H. Leyhe tells the story: “We put a price on her that we thought we would never make with her and we arranged for my brother and me to meet with Captain Chris and Tom on the Tom Greene at Louisville. On the way over my brother said to me, ‘I think we should ask for some earnest money in case they don’t take the boat, for we have a good trip in sight.’ I said, ‘Well, if they don’t take the boat, we would not keep the money,’ so we didn’t mention it. 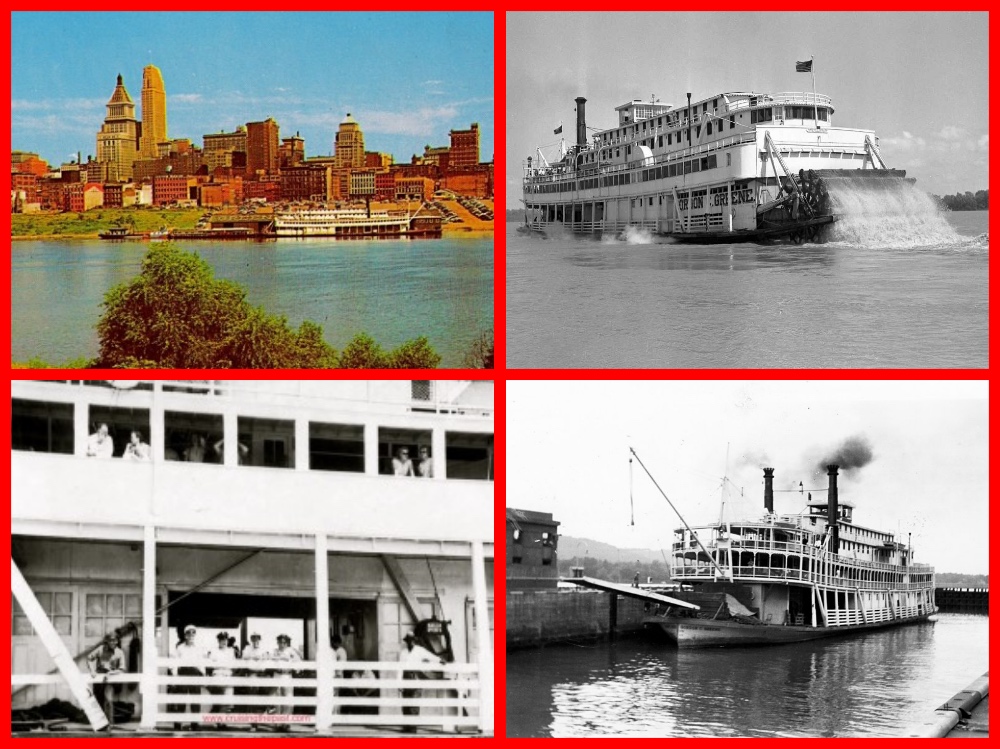 “After the deal was closed Chris said, ‘I guess it is customary to put up some earnest money,’ and inquired how much. My brother said, ‘We will leave that up to you.’ Chris said, ‘Five thousand dollars?’ We said, ‘O.K.’ 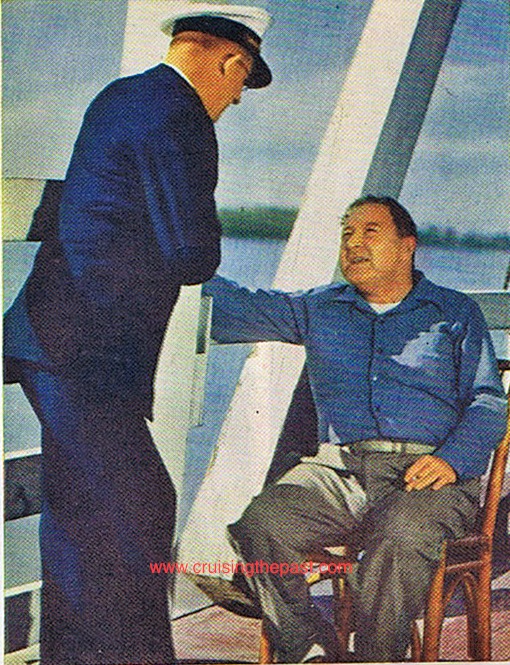 Capt. Joseph W. Heath, of the Gordon C. Greene, and Capt. Harry Reardon, a tugboat pilot on a busman’s holiday, discuss a favorite subject – the Mississippi.

“All arrangements had been made how she was to be paid for and when they would send their men to take her over. Captain Mary Greene was sitting up with us and when my brother and I got up to leave Mrs. Greene said, ‘Boys, you will get your money,’ and we did.” 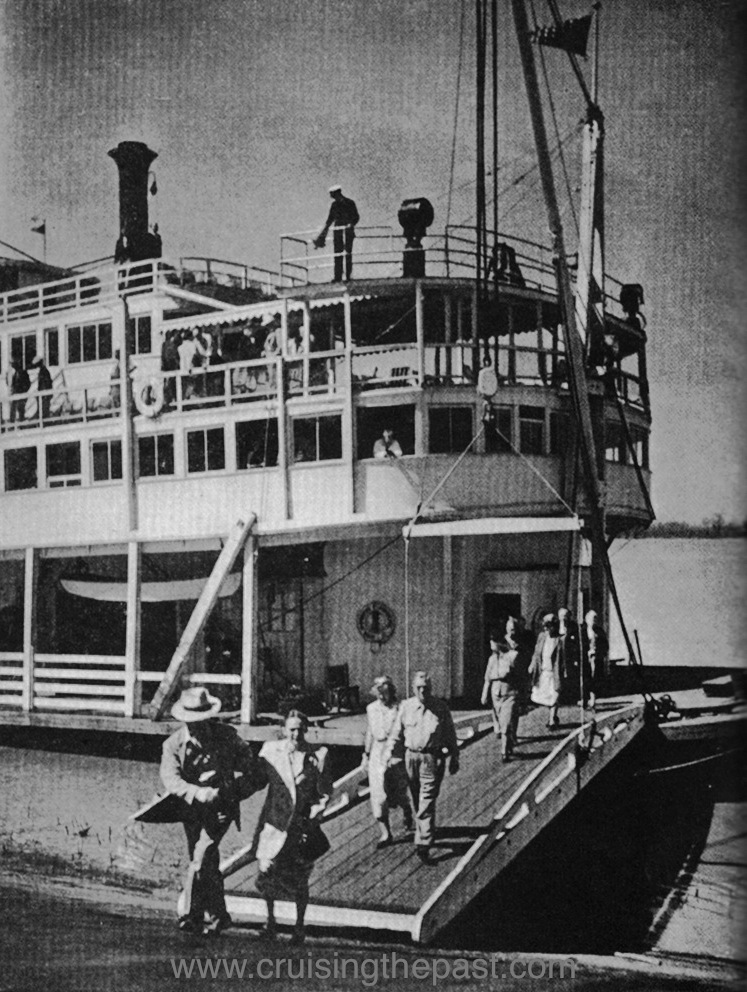 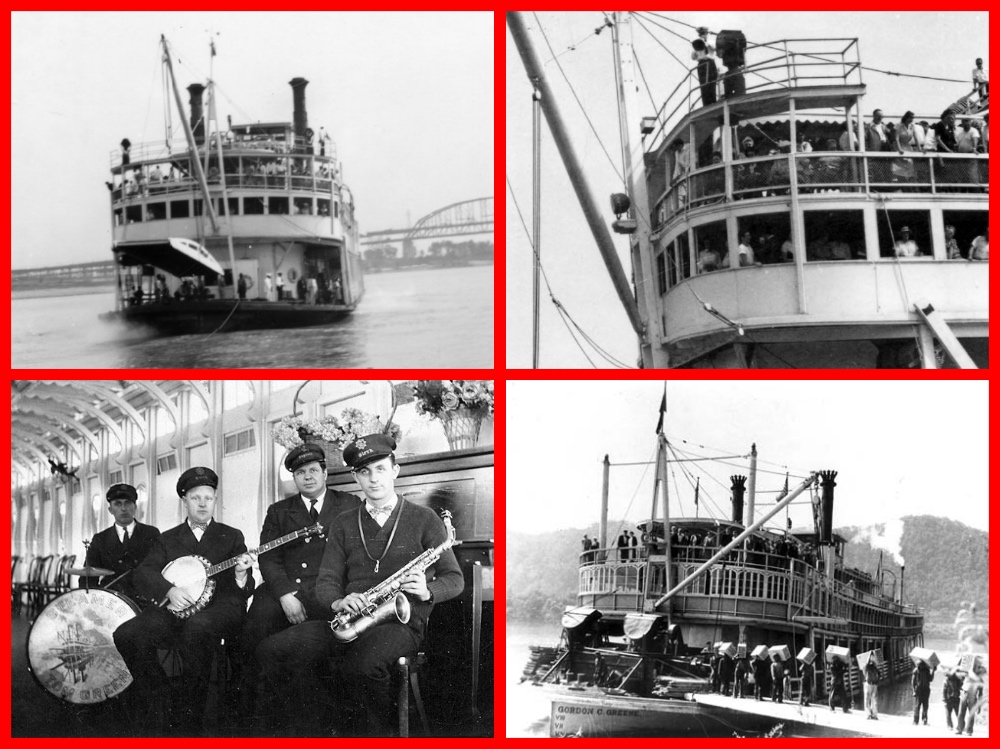 The Gordon C. Greene on the river and the boat’s band.

The result was to make her less pleasing aesthetically, but more attractive from a revenue standpoint, as these were the choicest rooms on the boat. Along with these changes, the names of various decks were revised as a move toward better public relations. 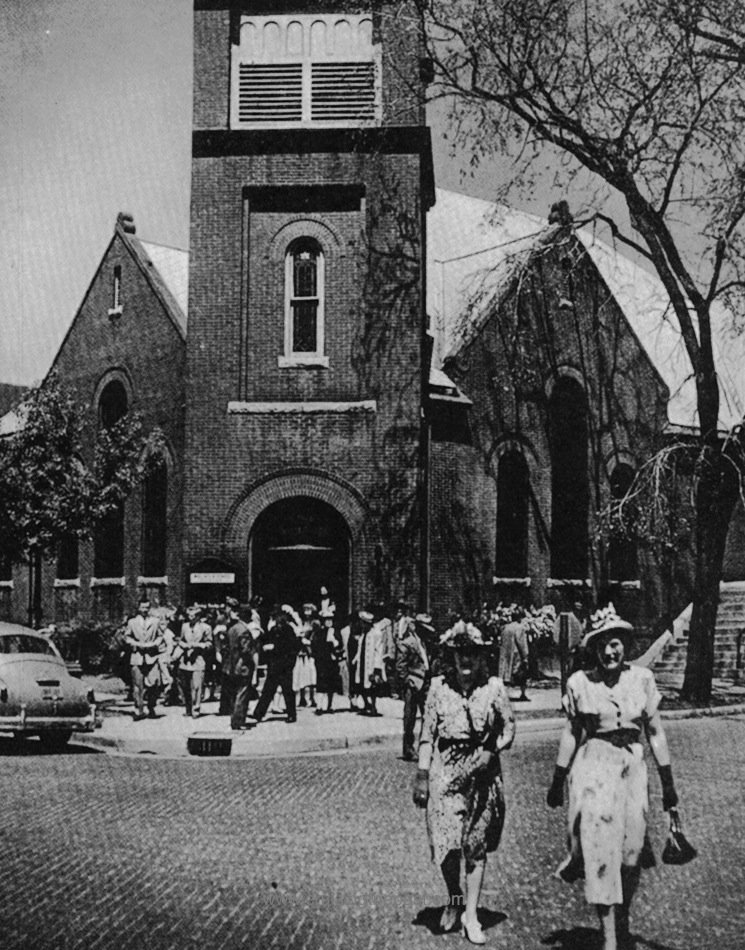 The boiler deck became the ‘cabin’ deck, thus ending unpleasant connotations of heat and explosion, and the Texas Deck became the ‘sun’ deck. To everyone’s mild amazement, she caught on. People began to come from all over the nation to take long trips on our rivers from Cincinnati to Charleston, West Virginia, New Orleans, Louisiana, Chattanooga, Tennessee, and even to Saint Paul, Minnesota, at prices ranging as high as $275.00 per person! 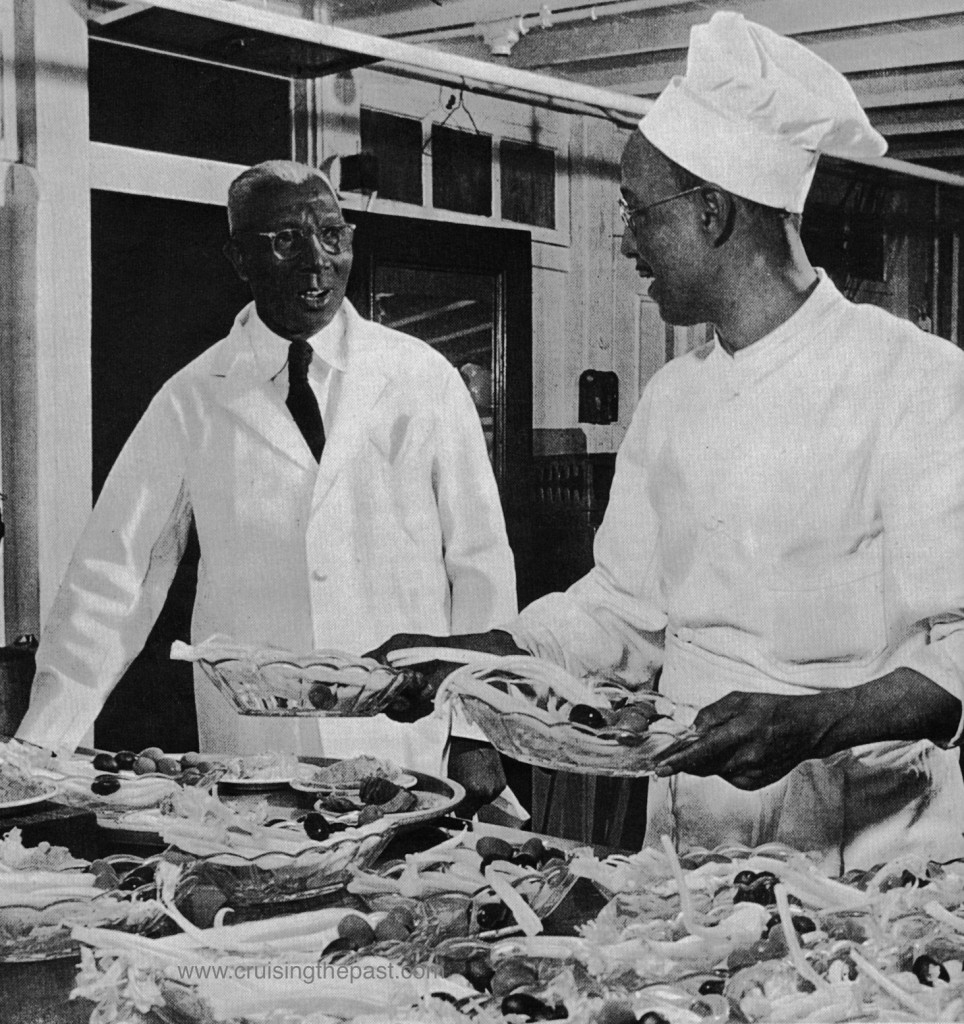 The Head Waiter and Pantryman prepare the evening meals.  The Gordon C. Greene was known for its abundant American and Southern cuisine. 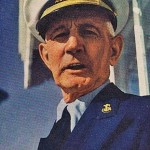 (Left: The first mate gives orders) A peculiar manifestation of our time was expressed by nearly everyone who’ rode her: “The first day on that boat I thought I’d go crazy! There was absolutely nothing to do. But after the second day, I found myself enjoying, for the first time in my adult life, the luxury of doing nothing.” Entertainment onboard was homespun, of the audience participation type, such as bingo, square dancing, and amateur acts by members of the crew. After seven to twenty-one days of this, each passenger felt like a member of the Greene Family. 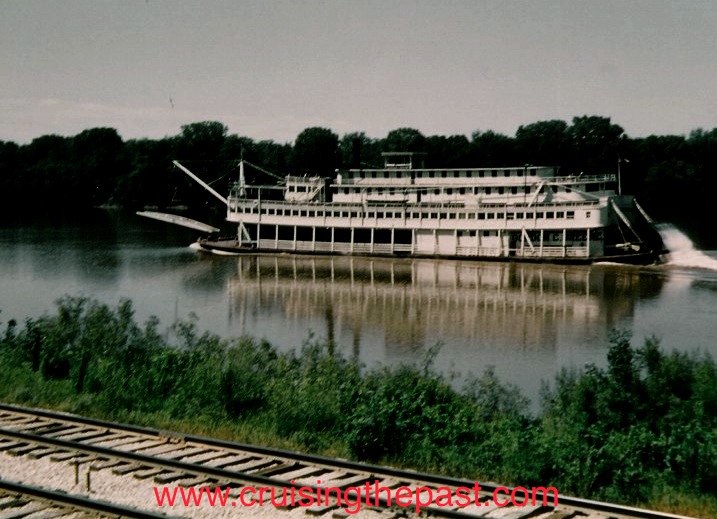 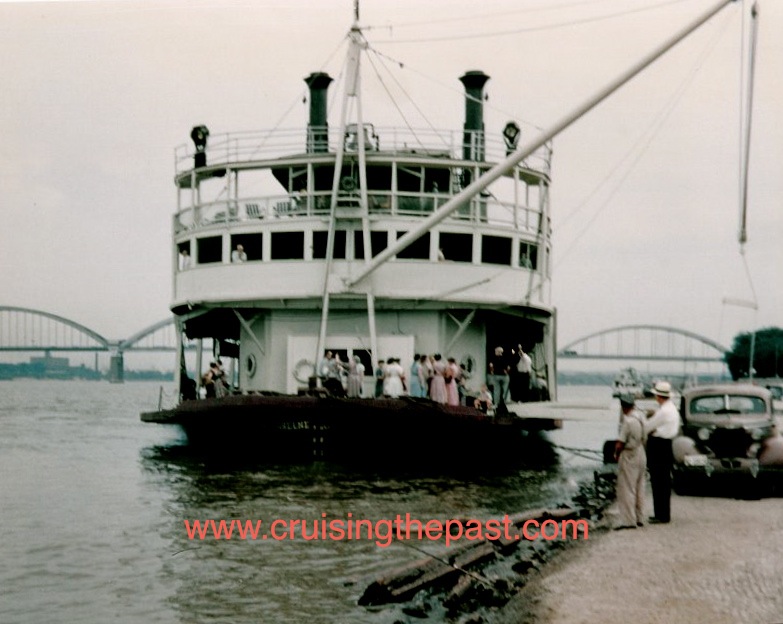 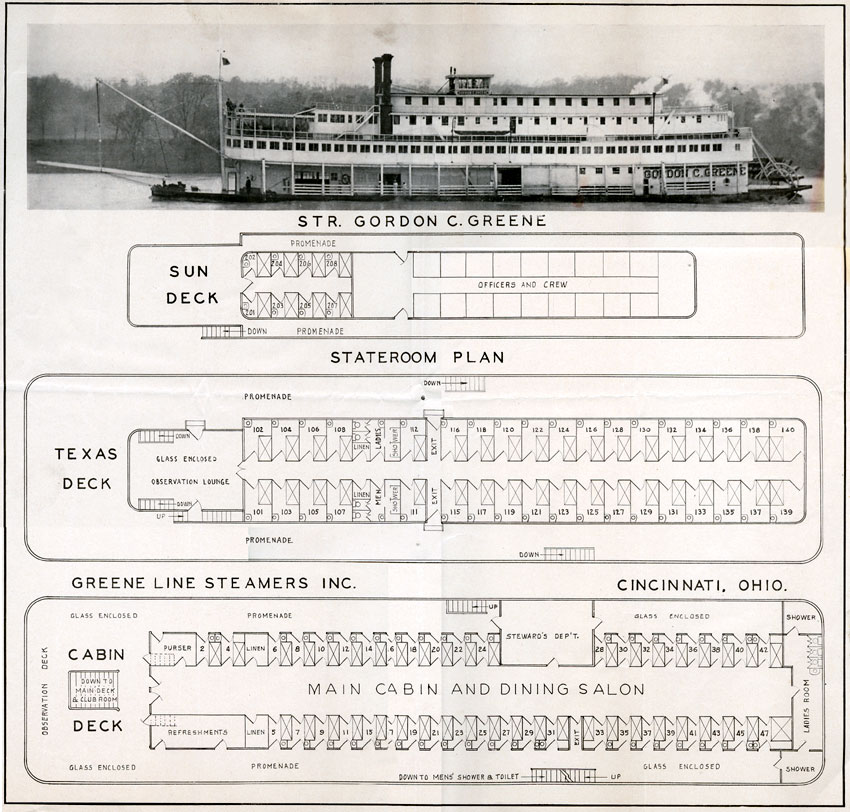 Aboard the steamboat – and the deck plan. 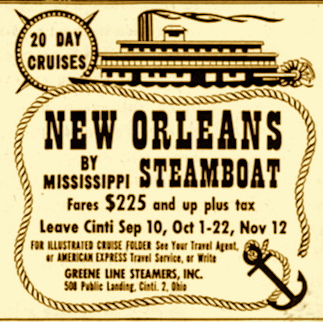 She appeared in the famous movies “Steamboat around the Bend”, “Gone with the Wind” and “The Kentuckian.”

In 1946 Captain Tom Greene had an idea, and the idea was practically a reality. He wanted to bring the Delta Queen around from Sacramento to the Mississippi, and so he did. On June 30, 1948, the Gordon C. Greene was deposed as the ruler of the rivers by the larger boat. She was placed in the Upper Mississippi River tourist service, but this blow seemed to ruin the old girl’s morale. She began to have the most unaccountable difficulties, even breaking her wheel shaft, and began to miss scheduled trips. Her retirement came in 1951. 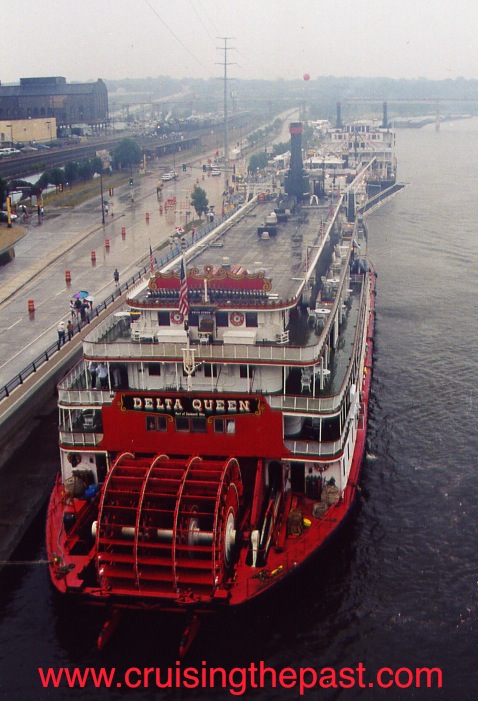 The Gordon C. Greene was replaced by the Delta Queen.

In 1952 the Gordon C. Greene was sold to Portsmouth (OH) and used as a hotel under the name “Sarah Lee,” in 1955 she was renamed “The Sternwheeler” and used as a restaurant and museum at Owensboro (KY). Sometimes she also spent a period of time as a floating restaurant at Tampa (FL). In 1960 converted to a theatre, bar, and tourist attraction at New Orleans (LA). 1961 sold to Hannibal (MO) for $49,100 and renamed to “River Queen”. 1964 moved to St. Louis (MO) and used as a restaurant.