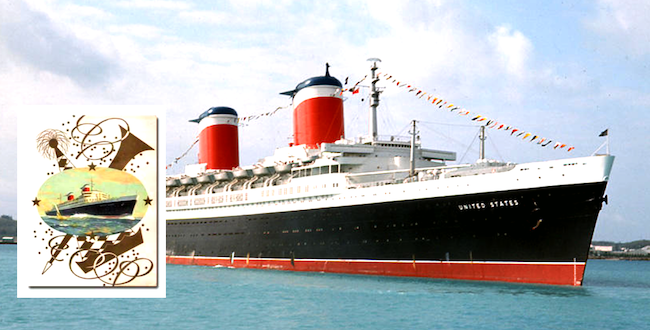 “The S.S. “United States”” by Paul McGehee. The famous liner, known as the “Big Ship” departs her United States Lines pier in New York’s Hudson River for a transatlantic run in 1963. To this day, for her class of vessel, she holds the transatlantic speed record, the “Blue Riband”, set in 1952.

The S.S. “United States”, which has languished at dock since 1969 and has miraculously escaped the wreckers a few times, was (2003) purchased by Norwegian Cruise Lines with the intention of restoring her and putting her back into the cruise trade. Passengers celebrating New Year’s Eve cocktails aboard the S.S. United States during the 1950s and 1960s. American military officer with his family celebrating New Year’s Eve dinner aboard the S.S. United States during the 1960s.  The father, serving in Europe, “crossed the pond” on a regular basis with his wife and children.

American military officers and diplomats (along with their families) had the choice of traveling first class by ship or travel tourist class by air when serving overseas.

The majority chose the ship.

Many children during the 1950s and 1960s were introduced to the deluxe service and cuisine found aboard the United States Lines, American Export Lines, Moore-McCormick, Grace Lines, Matson Lines, American President Lines and Delta Lines.

Most would dine at the early sittings or be served at a special children’s sitting in a separate dining room.

The American flag ships were heavily subsidized by the U.S. Government and managed to compete with foreign companies having lower labor costs by offering competitive fares.

When the subsidies stopped in the 1960s and 1970s, the American passenger fleet disappeared.

History of the SS UNITED STATES…

Throughout the first decade of service, the SS United States maintained at least a 90 percent occupancy rate.

By the late 1960s, the Big Ship was losing approximately $4 million per year.  This was the case despite carrying more passengers than either of Britain’s Queen Mary or Queen Elizabeth.

The jet age was underway.  For the first time, in 1957, airplanes carried more passengers across the North Atlantic than passenger liners.

In October of 1958, just one month after the SS United States logged her first millionth mile inbound at the Statue of Liberty, the first transatlantic jet airplane crossing marks the dawn of a new era in transportation.

Even with her tremendous speed capabilities, America’s mighty flagship could not match the speed of the commercial jet liners.

The unions were exerting more and more pressure on United States Lines and managed to disrupt service on several occasions.

Just two days after the SS United States logged her one millionth mile, the early October 1958 eastbound crossing was cancelled due to a labor dispute with the Masters, Mates, and Pilots labor union.

Unfortunately, this proved to be the first of a series of devastating labor strikes which would disrupt service and strike a fatal blow to America’s flagship.

This marked the beginning of a slow decline.

From the early 1960s, the SS United States began carrying fewer and fewer passengers as more of them defected to the airlines.

There were several voyages where the crew outnumbered paying passengers!  The future was growing dimmer and dimmer.  In September of 1960, the US Department of Commerce announced the contract to carry military dependents had been ended.

United States lines was in desperate need for added revenues.  United States government subsidy regulations prohibited the SS United States from deviating from the intended North Atlantic route.  In 1962, after persistent lobbying by United States Lines, America’s flagship was granted permission to cruise to destinations outside of the North Atlantic.  With minimum fares over $500, the cruise ship market proved to be more profitable.

America’s flagship became the most prominent cruise ship of the early 1960s.  The SS United States traveled from New York to destinations such as Nassau, St. Thomas, Trinidad, Curacao, and Christobal.  Winter cruising would help to ensure the SS United States would remain in service during most of the decade.

The strikes would continue, one sending both the United States and America to Newport News to be temporarily laid up.  United States Lines revealed that it cost approximately $20 million to keep America’s flagship operating each year, making it the costliest passenger ship of that time; $7 million for crew, $3.5 million for fuel, $3.3 million for supplies, $2.4 million for port costs, $1 million for union contributions, and $1 million for commissions.

In 1966, America’s flagship continued a regular interval of transatlantic crossings, supplemented by cruising during the winter season.  During this year, America’s flagship carried more passengers than even the SS France.  The SS United States was now calling at Rio De Janeiro, Dakar, Teneriffe, Gibraltar, and Lisbon.  1967 saw the unfortunate death of William Francis Gibbs, the legendary designer and long-time supporter of America’s flagship.

In 1968, due to worldwide conflicts, the United States government asked travelers to avoid trips to Europe to save money.  In this year, United States Lines was purchased by conglomerate Walter Kidde & Company.  Unfortunately, the SS United States was not warmly welcomed into the new business combination.  The holding company believed the super-liner was obsolete and too costly, largely due to labor costs.  The service days of the SS United States were now numbered.

In January of 1969, the SS United States made a cruise to Cape Town.  By the summer of that year, rumors were surfacing that the Big U would be retired.  There were also rumors that management was recognizing extra expenses relating to other vessels in the accounts of the SS United States.  Unions continued to demand more and more money from the new management.  In addition, government subsidies were steadily decreasing.  The ship received an annual subsidy of $12 million from the government.  Despite this, in 1969 the ship lost $4.8 million.  Sealing the fate of the super-liner, an extended government subsidy was not granted when it was due for renewal in late 1969.

In November of 1969, an order was issued from New York to cancel an upcoming 21 day cruise.  Instead, the ship was ordered to report to Newport News to undergo an early annual overhaul.

Sadly, the October 25 Voyage 400 from New York to Southampton, Le Havre, and Bremerhaven would turn out to be the last.  However, reservations were still being taken for a 16 day Christmas Caribbean cruise and a grand 55 day Pacific cruise which would have marked the SS United States’ first passage through the Panama Canal.

On the morning of November 7, 1969, America’s flagship, Blue Ribbon champion, and pride of the merchant marine would dock at Pier 86 in New York for the last time.

On that evening, the SS United States quietly departed New York bound for Newport News with a crew of 350.  Most believed the ship would receive her customary overhaul and return to New York in time for the Christmas Caribbean cruise.  Once at the shipyard, the SS United States went to a berth rather than the customary dry-docking facility.  Chief Quartermaster Leslie Barton was the last man to ring up “finished with engines” on the wheelhouse telegraph.

America’s flagship with her mighty engines were never to operate under power again.  On November 11, as work was underway on the SS United States, an order was received from New York to have the ship laid up.  The funnels were only painted on the port side and work suddenly halted.

By November 16, orders were received to deactivate the ship.  Roughly 1,000 crew-members… all except the Commodore and Chief Engineer were laid off.