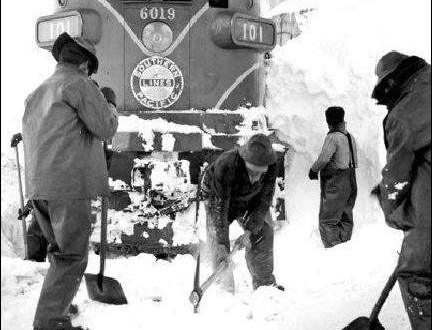 For three days, its 226 passengers and crew were cut off as rescuers struggled to dig them out. Help arrived just as hope began to dim.

Great video on the train trapped by the blizzard…

It was late Sunday morning, Jan. 13, 1952, and the Southern Pacific streamliner City of San Francisco was already 22 hours behind schedule. This was wartime; factories in Nevada needed to get munitions to San Francisco and on to Korea. If one train — passenger or freight — got stuck, all were delayed. 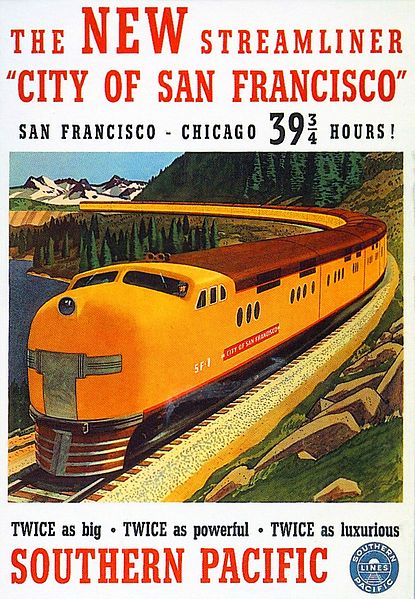 The 18-car train bound for Oakland rolled out of Norden, Calif., near Donner Summit, at 11:23 a.m., and into a blizzard. It carried 226 passengers and crew.
Winds gusted to 100 mph, whipping the snow into huge drifts. Miles ahead of the train, a snowplow cleared the tracks. But after the plow passed, two snow slides covered the rails again. No one knew. 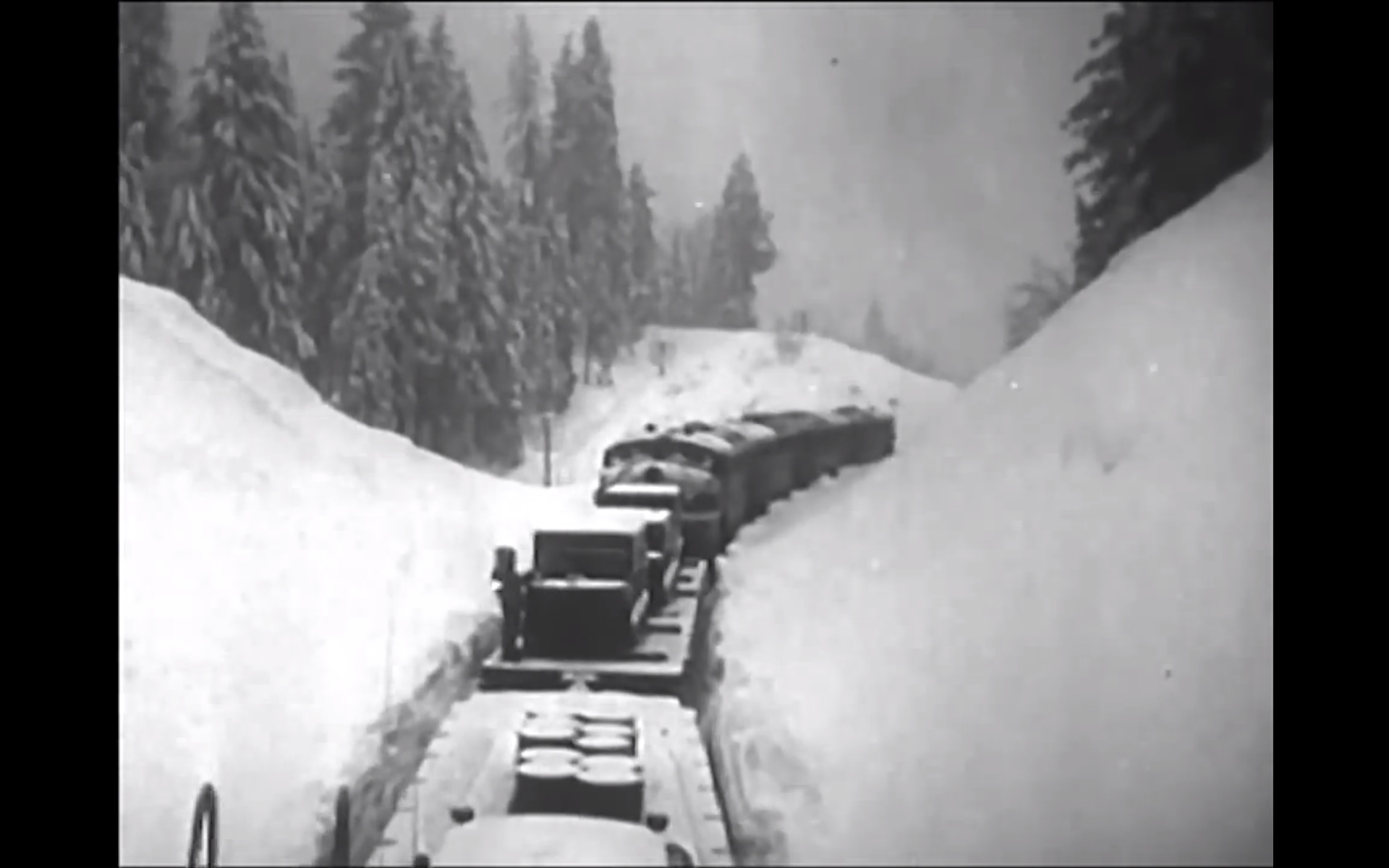 The train reached Yuba Pass about noon and plowed through the first snow slide at 35 mph. But the second slide — 10 to 18 feet high — stopped the train.
Railroad workmen hiked a quarter-mile to a call box to report the incident. Passengers, assured that help had been summoned, settled in to pass the time. Steam generators supplied heat. A card expert gave bridge lessons. A salesman organized a talent show. Dr. Walter Roehll of Middletown, Ohio, took charge and set down rules: no drinking. He needed the gin from the bar to sterilize his only needle.

“We laughed and played games, making bets [on] how long it would take the snow to build up on the outside of the windows,” Doris Bugbee Bourgeois, 85, said in a recent phone interview from her home in Folsom.

Railroad workers cracked the doors open at the ends of each car for ventilation. Snowdrifts had covered the train.

Railroad historian Robert J. Church describes the incident in “Snowbound Streamliner,” published in 2000. Church, a Sacramento dentist who has loved trains since childhood, had heard about the incident decades earlier.
“I was giving a talk at the Sacramento Railroad Museum when an old, stooped-over guy said he was one of the snow pilots who tried to get to that stranded train,” Church said in a recent interview. “He kept track of everything in his logbook, which piqued my interest.” Church used the log as a source.
Aboard the snowbound train, the jovial mood began to fade early the next day as supplies ran low and the blizzard continued. Water froze in the pipes and toilets backed up. Battery-powered lights ran down. Food was rationed. Steam heat stopped. Soon, there was only darkness.
Outside, the blizzard worsened, the wind howled and the temperature hovered near zero.
Meanwhile, local residents and skiers at Rainbow and Soda Springs lodges joined with railroad, electric and highway crews to use dog sleds and cross-country skiers to deliver supplies.
Rescuers went without sleep or food, using bulldozers and Sno-Cats around the clock as they tried to clear a road to the train and plow the tracks. Their heroics drew the eyes of the nation via a relatively recent medium: television.

Passengers heard a radio broadcast mentioning that a train was stranded “somewhere in the Sierra,” Church wrote. “Then the radio went dead.”
By early Monday evening, passengers began burning any wood they could find — floorboards, luggage racks and ladders — to keep warm.

A morphine addict in severe withdrawal became “somewhat of a problem,” Church said. Roehll, the doctor, locked the addict in a compartment.

“They got everyone out in the nick of time to breathe fresh air,” Church said.
The first casualty came a few hundred yards from the train. A rescuer, Southern Pacific engineer Rolland “Rolly” Raymond, was driving a rotary snowplow on the tracks. He had nearly reached the train when a snow slide buried him. Others saw it happen but couldn’t save him; it took days to find his body.

San Francisco Chronicle reporter and future columnist Art Hoppe followed the train tracks four miles on foot to the snowbound train, along with photographer Ken McLaughlin. They had been working on a story about highway crews fighting the winter snows when they heard about the accident.

“When they finally got to the train and inside the baggage car,” Church wrote, “Art exclaimed that he could use a stiff drink. ‘Why do you think that camera bag is so heavy?’ McLaughlin asked, producing a bottle of booze.”

After a few nips to warm up, McLaughlin shot photos while Hoppe interviewed passengers. Then they walked five more miles to Nyack Lodge and called the Chronicle with the story late Tuesday afternoon.

Hoppe stayed at the lodge while McLaughlin hiked back to the train to help others. “He did not sleep and went without breakfast to help stretch the meager supplies,” Church wrote.