LATEST
Home > ALL POSTS > SS LIBERTE – Crossing the Atlantic with Elizabeth Taylor and all the stars! 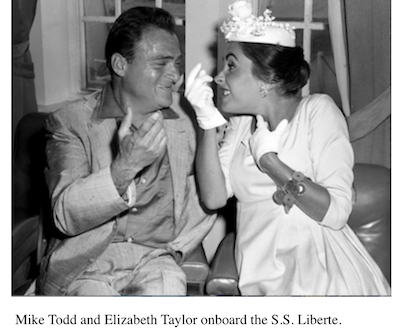 SS LIBERTE – Crossing the Atlantic with Elizabeth Taylor and all the stars!

As the SS LIBERTE, the liner became the stop gap flagship for CGT French Line as a replacement for the legendary SS NORMANDIE that had been lost during the Second World War. A look at the Liberte. My aunt and friend on the Liberte in the 1950s. It is during this period which the shipping companies, both European and American, found themselves clamouring to rebuild their diminished fleets. The French Line, having lost it’s fabled Normandie, was suddenly out of the fierce competition it had enjoyed prior to the War, when rival nations had struggled not to best each other in weaponry or strength but in who could master the seas and prove the fastest on the North Atlantic.

Celebrities aboard the SS Liberte Many African-American celebrities sailed aboard the French Line because the French were far less prejudiced and much more welcoming than the US Lines and Cunard. As Germany submitted itself in disgrace to the American and British invasion forces, its national assets and treasures would soon be confiscated as war reparations to those nations who had fallen under Hitler’s assaults. The Europa, having been siezed by American troops in May of 1945 as they advanced into Bremen, was to be turned over to the French.

Renamed Liberte, the former North German Lloyd flagship would now fly the French flag. In the days preceding the war, Europa had represented Germany as one of the fastest ships on the North Atlantic, having captured the Blue Riband in 1931 with a record crossing of 27.91 knots. Now though, as the Liberte, she would find her place as a flagship successor of the Normandie.

For a time, the Liberte would enjoy being third to none. Her only comparisons were those flagships of the British Cunard Line, the Queen Elizabeth and Queen Mary.

Teamed with the Ile de France, the Liberte would give the world a small glimpse of what the French Line had to offer before the Second War.

With crisp white linens and deft French service, the standards which rose Normandie to acclaim remained in place aboard Liberte.

Now paired with the Ile de France rather than the Bremen, it was in reassuring comfort that passengers who could recall the prewar era, would find solace in the atmosphere and familiarity present aboard the two ships. It would remain thus for far too brief a time.

Following the launch of the characteristically American SS United States, the Liberte underwent a major refit both interior and exterior.

Ile de France would first fall under the stroke of time and age, making her final voyage in November of 1958. Then, three years hence, the Liberte herself would find her career for the French Line at a close.

With the liner dormant and her fate uncertain, much speculation arose as to the proposed fate of the Liberte. There was talk of her use as a hotel at the 1962 Seattle World’s Fair, but spared the undignified fate of her former running-mate, the Liberte would decidedly be scrapped before suffering a similar end.

On January 30, 1962 she made passage to La Spezia, Italy where she would be broken up. Six months later, nothing but memories and scattered relics would remain of the liner which had served as flagship for two nations.